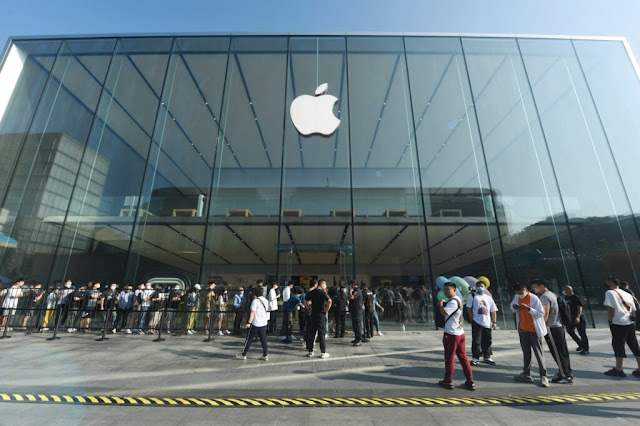 Two Chinese pro-democracy activists began a hunger strike on Monday in front of Apple's corporate headquarters in Cupertino, California, calling on the company to remove restrictions on AirDrop in China.

The big picture: Recent widespread demonstrations in China against COVID restrictions and limited freedoms have inspired solidarity protests among Chinese communities abroad. Details: In October, people in China used AirDrop, an Apple feature allowing users to share files and images with other devices nearby, to evade online censors and disseminate photos of a protest banner hung on a bridge in Beijing that called for an end to COVID restrictions and for Chinese President Xi Jinping to step down.

What they're saying: "This hunger strike is inspired by the white paper revolution," VK, one of the two hunger strikers, told Axios.

VK and his fellow protester released an open letter on Monday calling on Apple to "Improve worker conditions at the Foxconn facility, stop censoring the Chinese AppStore, restore AirDrop function on iPhone in China, condemn the mass incarceration of Uyghurs."

VK said he also attended the protests at Bay Area universities over the past week and that a decentralized but growing network of activists has helped them prepare for their hunger strike.

What to watch: VK said they will drink only water and maintain the hunger strike for several days, or as long as they can safely do so without harming their health.