Note: This write-up was taken from a Facebook post by Associate Professor of Economics at JNU, Indrani Roy Chowdhury. The text remains as it was posted. Alas ! Media has finally waken up with half truths ..... JNU is again flashing back in the headlines ..... 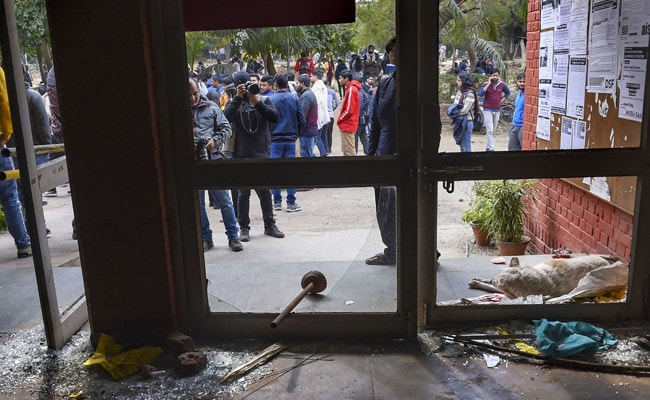 Note: This write-up was taken from a Facebook post by Associate Professor of Economics at JNU, Indrani Roy Chowdhury. The text remains as it was posted.

Alas ! Media has finally waken up with half truths ..... JNU is again flashing back in the headlines .....

Where were the media when JNU website was hacked for two days by the agitating students with masks (except the one, who perhaps is pursuing the ambition of being another Kanaiya Kumar)? Where were the media when the windows were broken, when the central server of JNU was vandalized, lakhs of rupees of optic fiber wires were cut and destroyed, staffs were evicted from the Communication & Information Service Centre (CIS), by a group of students, in order to disrupt the registration process of the willing students ? This is the heinous crime I ever heard of from the student community ..... this is incredible that some of our students like terrorists are hiding their faces and destroying the public properties of the University of national eminence. Ironically the media selectively and briefly shared the news. Ironically the JNU Teachers' Association (JNUTA) instead of condemning remained mysteriously silent about this act of vandalism. Even after that some of us were surprised to learn that no police was called inside the campus and no action has been taken so far against those students who committed this crime. Only the internal security somehow cleared the blokage and we heard that students guarding the gate were beaten up. We heard (and saw the pictures) that the central server is damaged so much that it is still under restoration and the registration could not be started even today. We have learnt that JNUSU have strongly condemned the assault towards the students who were guarding the CIS. Curiously I asked one of the agitating student whom I taught, that "you talk about democratic rights and you condemned the assault of some students but you are not condemning this act of vandalism ? He replied "this was done by some miscreant students whom we don't have control". I asked then why you condemn the assault ? Don't you think they deserve some punishments ? The answer is obviously blowing in the wind ......

There is no answer for many things ....... No answer why the students are not celebrating their win when these two months of lock down has actually managed to reduce the hostel rents to 600 /300 and 150/300 for the BPL students ? Why they want to still continue this lock downs ? Some of them are saying they want full role back ....some says we have some more agendas to fulfill. Some are suspicious of something ..... Of all these, some of our students are sharing confidentially that they want to withdraw from the movement because they suspect some hidden agendas and vested interests.

We the helpless, voiceless spectators, who have been thrown out from our own office rooms for the last two months, are biting nails, undergoing depressions, fighting all odds and sitting in roadsides or in the parking lot in the harsh winter for student advise or other important academic activities and hoping against all lost hopes that normalcy will be restored soon in the coming days, when we will get back to our own cosy corner, where we can again get lost in our own thoughts, without any interference. Some of us in some of the days under desperate situation have to plead the students, who are blocking all the gates of our school building, to allow access to our own office rooms, for just five minutes, to collect some important documents, books or hard disc etc. If we succeed we will be accompanied by some student to watch our movements. Many of the times, we face harsh words, indefinite wait, denial, asking us to come in the weekends or after the office hours. Many of the times our PhD students would get access to open our office room (instead of us) to take out some important stuffs. There is no platform in these days to raise voice about the intrusion of the democratic space of a teacher, for it us no longer a concern for JNUTA. But we do often talk, argue, debate so much about 'democratic space' in JNU !!

JNU administration has announced the registration for this winter semester from January 1st to 5th and opened the option for those students who have discarded the examination for three times (and therefore could not finish the last semester evaluation, because of the movements), by giving them provisional registration and has made the registration online for all. First two days the registration was taking in a slower pace, which always happens as the students have to collect the clearances from different places. But it seems many were interested to register ..... many are actually exhausted by the two whole months of agitation, many are the Masters students whose future are uncertain and have to prepare themselves for rounds of competitive procedures, many of them are 9B PhD students, who have to submit their thesis by this June, many are the MPhil 4th semester students who have to submit dissertation in the forthcoming June. The students now divided and in favour of registration are gaining strength.

So long things were more or less uncontested ...... there were support from the students, support from the teachers. But now something is going against ..... the student support base is getting thinner but the movement can not be withdrawn. The registration process should be disrupted, so that none can register.That becomes the root cause of the conflict.

I was in the Dean office yesterday from 10:00 am. and has been traumatized to witness the frenzy of the students shouting slogans for boycotting registration, threatening us to leave the place within 5 minutes or they will lock us for hours. Some students already were there for registration but the server was still under restoration. Around 11:00 am onward, around 20-25 aggressive students of JNUSU were entering the building in waves and it was strategically the girls who were threatening, shouting, abusing the office staffs and the students waiting inside for registration. The blocked the school gate for the faculty as well as students. Four of the PhD students (Suman, Shantu, Shubomoy and Arup) belonging to our Centre were there for registration and were guarding us. These students to the best of my knowledge are not actively belonging to any political camps. During that times students from both sides were taking the video clipage of those incidents. Four five girls students snatched the mobile from Shubhomoy and threw it outside, then they started abusing each of them, violently dragging them with snatching their collar to outside and slapping, thrashing and abusing verbally. Shantu was heckled and bullied for taking videos, his jacket was torn down in front of us, Arup was thrashed and abused for more than half an hour and his mobile had been snatched by somebody. These JNUSU students managed to do all these to those innocent students without any opposition, as there were not a single AVBP students around during that time. There were students in masked face standing and watching in groups and many of us were suspecting that some of them may not be our students and some may be from Jamia Millia. When Arup was finally resqued from the girls mob he was traumatised, crying and shivering like anything. We were simply shocked by their intensity of nastiness and vulgarity. Overhearing about FIR from us they shouted back by saying they will lodge FIR by alleging that these students (Arup etc ....) have sexually abused them. Around 5:00 pm we saw hundreds of students with masked face were running with big sticks, rods and stones towards the hostels. Later i heard that Tapti, Sabarmati, Koyena, one after another hostels were attacked, CC TVs have been vandalized and even the faculty quarters have been attacked. Some students are badly injured, some fled outside, some are missing ........ and videos keep pouring from all corners with news of brutality, injury and blood shade..... I left around 6:00 pm and didn't witness the horrifying episodes followed by that. I am deeply anguished to learn that our seniour colleague (Prof Sucharita Sen) is badly injured. I am deeply worried about the safety of those vulnerable students, because it is easier to cause harm to someone with no political footings.

It is difficult to believe that it is the University which taught us to respect diversity ..... to create space for differences in opinions and thoughts and create harmony and coexistence. It is not the University I knew and taking pride of being that fraternity .....

Disclaimer: The opinions expressed within this article are the personal opinions of the author and they do not reflect views of mine and I do not assume any responsibility or liability for the same.