EFF resigns from W3C due to DRM Inclusion

What a depressing state of affairs. This is what happens when, like always these days, profit is put before people. I really don't envy Berners-Lee's position as there really isn't any easy way out. 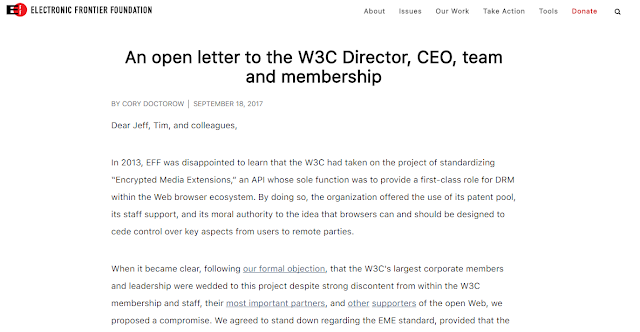 What a depressing state of affairs. This is what happens when, like always these days, profit is put before people. I really don't envy Berners-Lee's position as there really isn't any easy way out.

In his post Tim basically says that sure, the W3C can disregard DRM but it won't change much, this is why we had flash and silverlight. It only makes sense to put this functionality native to the browser.

Now the W3C can be what it is - a front end for corporations and lobbyists buying their way into "open and free standards".

I understand the why money is useful to the W3C people and Tim DRM-Lee wants to live a happy life on a sunny beach wondering why people think that he turned against the people. The much more important thing is that an organization that attempts to control standards such as the W3C is not even needed in the first place - and most definitely not when it became a lobbyist organization.

It is time to move towards another organization altogether, so simply making W3C obsolete altogether; or having an organization that actually is honest and has principles rather than attempts to force people into vendor-DRM-lock in.

I am also very critical of Mozilla due to other reasons, namely because they have too many developers who are just clueless; and they no longer have a lot of intelligent leader people (ideally you could work without "leaders" ... but what I see at Mozilla is more the headless chicken syndrome) - but Mozilla has made one thing right, actually. They provided an opt-out mechanism of DRM. Now, granted, if you'd advocate a TRULY free web then you would flat out refuse DRM infection of systems. But if you can not or do not want to do THAT, then the SECOND best option is an opt-out system.

There, the people who want to promote DRM (or don't care), can use it - and those who don't want to, don't. I'd use the "no DRM ever" part, just as I also am within those who say "all malicious content must be blocked" - that includes ads.