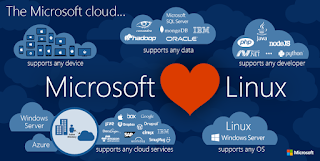 Microsoft is trying to reinvent itself. Linux and open source was silly hobbyist stuff in the 90's and 2000's but the next big thing in the 2010's, and the old ways are no longer fashionable.

Microsoft is trying hard to push itself as open source friendly, in sharp contrast to its 90's image of being the #1 enemy of open source. For example, they are working to open source C#/.NET components, and are working with Mono/Xamarin et al. It is trying to align itself as an ally or friend of Linux, not an enemy.

Moreover Microsoft is trying to push itself, on the server and cloud front, as being "open" in contrast to being locked into proprietary technology. Their Azure platform heavily advertises compatibility with non-Microsoft technology including Docker, node.js, PHP, Java, Python, etc.

It is important to note, they are going specifically after developers with this Ubuntu partnership thing. As I said before, open source is a trendy thing in this new age - Docker, Python, node.js and even PHP are in. ASP.NET is out. Microsoft is pushing to be seen as being part of this trend, not fighting against it. They want you to run Ubuntu developer tools on Windows, to deploy node.js or PHP apps to an Azure instance.

These factors and a few others spooked investors who bailed on the company contributing to its stock price decline. At the same time, you have others arguing that its long term prospects are still solid and that this miss is a temporary one as Nadella's push to transform its core businesses gains better traction.