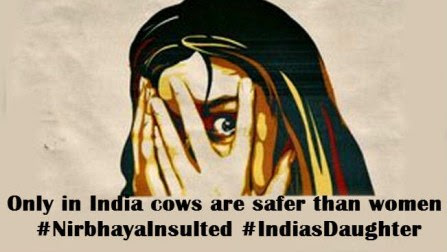 I saw the entire documentary and it made me sad and angered me a lot. But I'm not ashamed of being an Indian. Why should I be? What did I have to do with Delhi's or any body else's culture or upbringing? I have never understood how someone's crime 2000 km away can shame someone else. That is, unless you're an NRI who'll very likely get stereotyped. Either those people stereotyping you have to change, realising that it's a universal problem, or you have to grow a thick skin.

I heard the woman who made the movie talking on NDTV. She said that she didn't intend to highlight India's rape problem but the world's. You know..it won't work like that. We'll keep getting stereotyped. The world or the west doesn't want to be ashamed for us.

While I think the ban is stupid & can in no way be justified, I don't understand why the documentary is being given so much prominence.

All in all..this video won't be watched by the class of people who're more prone to raping. We'll just keep preaching to each other. I can only hope that this hits some politician hard and he'll take the right steps. Education, slum development, putting kulcha warriors in their place.The west will just target us more using this. They won't be of any help.

Do we need a documentary by a foreign film maker to tell us how regressive our views on women are? What is it trying to tell us that we already don't know? It might occupy the national consciousness for a few days . But what after that? It will take much more than a video to bring about a paradigm shift in the way our society looks at women.