iPhone 6 ? Meh..Voices of the People 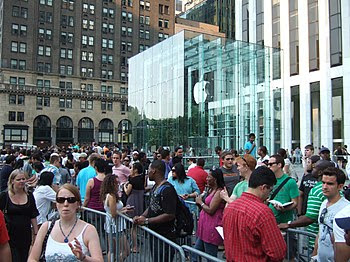 Since the live stream of Apple (Sept 9) keynote, I've been observing and collecting opinions.. of people from social networks....Below is the list of comments that I find funny, Interesting, resistive and hateful. [Viewers Discretion is advised.]

"Can Apple now be known as a cult? The amount of followers whose sanity is questionable it has, I should think it can..


"But anyone will buy it nonetheless. Capitalism works.... in a way...

"Iphone6 definition : a simply overpriced piece of garbage the size of a candy bar that is overshadowed and out performed by just about every Galaxy Model.

"iPhones are different every generation" ya by around two centimeters and a few new colours.

"Till they get a Intel language possessor in it, I will stick with my galaxy s4.

NFC Pay has been around for a while, but now that Apple includes it in their phones, it'll take off because almost overnight huge swathes of the population will now have this feature and be expecting to use it, forcing retailers into getting widespread adoption.

Apple doesn't necessarily innovate on the same level as Google, Microsoft, IBM etc., but they do bring technology to the masses in a way none of those companies can.

People are ragging on the iWatch because it's not a new concept, similar products have been around for years, but none of them have attained anything close to the level of market penetration that the iWatch will achieve within a few months of being released, and that market explosion will force other companies to create better Watch products to match Apple and encourage the growth of the market.

The thing I'm most excited for is Apple's introduction of a "Google Glass" type product, that will immediately bring Augmented Reality to the masses and it'll take off within the minds of the general public withing a few years.