Introduction to Hacking; How to get Started ? 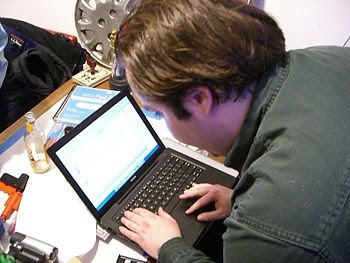 The word 'hacking' actually/originally means taking (usually) electronics equipment and re-purposing it for another use. Attacking computer systems is(was) called 'cracking', but misuse by journalists and popular media to use the word 'hacking' instead has caused this word to become the mainstream for computer based attacks.


Originally hacking was sitting down at a computer and coding out a program without any plan or organization. Currently hacking is a multiple step process of scanning a network for security vulnerabilities, finding possible exploits, creating a weaponed program to get inside the network and take valuable files such as earnings reports or account information. Then removing your actions from logs.


How to get Started ?

To become a 'hacker', you need to first become a good (by good i mean really real good) programmer. How computer works ? what makes them tick & do things they are meant to do. Thing about programming languages; the theory is more important than the language, usually. Once you know one, you can almost certainly learn another with minimal effort.

Considering your goals, it depends what kind of "hacking" you want to do. Reverse-engineer applications? Check out Assembly. Do "security research" on websites? PHP is good to know; it has a lot of vulnerabilities due to sloppy coders and it's ubiquitous. It's almost better to just learn a language for the sake of programming in it, and then take a dive into the more hardcore stuff - because "hacking" as you describe it is essentially the "world championships" of programming; it's subversive, under the table, bleeding-edge stuff that brilliant security researchers make big bucks working on. And most programmers can't do it.

Once you've mastered pointer arithmetic, once you know the difference between the heap and the stack, once you know all the intricacies of how the memory model works, the difference between little-endian and big-endian; then it might be time to delve into some of the more involved, "hacking"-level things. But for now (and by now, I mean over the course of a few years) become proficient in something useful like C++, and by then, you might have job prospects or other interests; either way, you won't regret learning a language like that.


Anyone Can become a Hacker..?

Hacking is applied creativity+curiosity+persistence about any kind of technology. Making use of things in a way that they were not intended to be used in. Thinking outside the box.

You made a microchip of a washing machine beep a melody? Congrats, you're a hacker!

If you're really bent on getting nitty-gritty with "hacking," go all out and skip C++; learn straight C, and then learn Object Oriented programming later (C++ is an OOP language). I can tell you right now, though: it will be hard, and not everyone is made for it. Good luck.
Share This