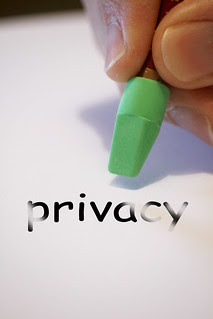 Privacy has less to do with logic and more to do with ethics and society. The feeling for the need to have privacy has its root in fear of others. As the world continues to become more open, safe, stable, technologically advanced, etc., the need for privacy in all settings will diminish. For example, our reliance on things like credit card numbers, SSNs, and the like will mostly likely be replaced by biometrics.

If you knew something about me that could affect my social standing, you could be able to dominate me with it - or you could at least interfere with my ability to dominate others.

So if a group in power takes away your privacy, they're unfairly affecting your ability to compete with your peers for resources & various other opportunities.

Privacy is only important because of the naturally occurring phenomenon called "trust". Trust is a dynamic created between two living creatures because we are mortal and often try to kill or injure one another for competitive reasons over scare resources.

Trust says that we will not attack one another on the recognition that at this moment there are enough resources that we don't have a conflict. Trust is usually gained during tests where there is a minor scarcity of resources or an opportunity to attack one another, and we actually don't. The more often we both avoid attacking each other (and possibly helping each other) the more trust we build up.