I'm going to use this space as my soapbox feel free to leave a comment if you disagree with me. I want to have a discussion.

There, I said it. And it's not because of the open source model.

The best open source games are rip-offs of commercial titles

Here's a list I found: (Note: I haven't played most of these games, but I know what they sort of look like)

And these are some of the best games the open source community has to offer. Yet they aren't original or ground-breaking. Why do open source games play it even safer than some major game publishers?

These games have another thing in common:

Not all game types are suitable the open source model

A game like FlightGear probably works great in an open source model. It might even be better than its commercial counterpart.

At the start of development, the ground work is laid out by a few people (engine, controls, external input). Content creators then simply create models, textures, planes, flight characteristics and all that funky stuff.

Now try to imagine how an open source Lara Croft game would work. People could make dungeons and puzzles and weapons, but the art would be inconsistent (unless strict guidelines are to be followed), there would be no coherent storyline (again, unless strict guidelines are met) and finally and crucially, no one would care. And when everything is finished, the game is done. You can't cram in more levels without diluting the storyline.

An open source model is best suited for games with a open outlook. Multi player games work best, because content can be made and plugged in easily. Story driven games are close to impossible.

Games need a dictator, not a committee

Let's take another example. A real-time strategy game. Games which are notoriously hard to balance, by making sure players can't win by using just one unit for example. You might say: well that's perfect! We've got all these eyeballs to spot bugs in the balancing.

Well, yeah, that's great. But they're going to be conflicting. Change one little thing (the amount of resources a harvester can gather) and you might change the entire outcome of a strategy. You can only balance gameplay by changing one value at a time. You can't merge these changes, because they're interdependent. If Developer A changes the fire rate of unit X to balance out its perceived dominance over unit Y and Developer B changes the defense property of unit Y because he feels it's because of a defense flaw, then you're going to have a problem.

When one person or one core team takes the final decisions, balance can be achieved.

This can be done in an open source model, but it will feel strange and unfamiliar. 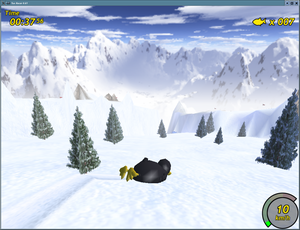 I'm going to take Super TuxKart as an example because this game sucks. Why does it suck, is it because the graphics suck? Naww, the graphics are fine. Is it the gameplay, is it not the fun to play? Oh it's fun all right, I've played this many a lunchbreak. Surely the sound must be ear-piercingly unbearable then? The sound is fine.

It sucks because it's of what ludology (the study of games) calls "integration".

Let's take a look at the characters. What do they have in common? Tux, Wilber, Elephpant, Eviltux, Gooey, Hexley, Mozilla, mr. iceblock, Nolok and Puffy. Besides being cute open source mascots, not a whole lot. They're in a kart, alright, but some of them have textures, while others do not. Mozilla for instance looks like he was carved out of a very pointy rock.

But how much can you screw up kart racing? You race in a kart around a lap. With power-ups. Ah, power ups. In Tux Kart you have the following power-ups: bubble gum that slows down other karts, an umbrella that slows down everyone, a cupcake that you... shoot and of course nitro, which is a seperate pick-up. What do these elements represent? Nothing! Nothing whatsoever!

And then we have: the tracks. In Super TuxKart, you race on a racing circuit, an island, dunes, a future city, a snow mountain, between the stars, a highway, an alien planet, a tropical island, an abandoned mine and a green island. Again, what's the theme here?

Now look at a racing game I consider excellent: Re-Volt. Re-Volt is about toy cars (theme: check) racing around realistically scaled tracks, such as a neighborhood, a museum, a theme park, a toy store (see what they did there?) and a supermarket. The cars are consistently small compared to the environment. In Re-Volt, you also have power-ups that could (with some imagination) fit on a remote controlled car, such as: a sonic boom that flips cars, fireworks that track other cars, something that turns your car into a bomb, water balloons and a battery that speed ups your car.

Why am I saying all these harsh words? Because I love you, open source games. I really do. And I want you to be better. I want you to stop ripping off your commercial brethren, and instead focusing on delivering quality products that can compete with them.