Kanthala Raghu (Author) - I am a big fan of #Ubuntu, the OS has fascinated me unlike any other Operating System out there. My Interest in Open Source (Ubuntu) has made me Write this article, and I'm pleased to announce that in this last few days of Ubuntu's Edge Campaign, we'll be pledging our full support to the Canonical Team Spreading & Explaining about the product to our Visitors. So you can expect more articles & stories. Stay Tuned.

'Ubuntu' - Damn it sounds so good just to say that.. i wonder What perks it provides

Ubuntu is an Operating System just like MAc OS or Windows. The main difference we are talking about all the present available OS's is that Ubuntu is an Open Source project backed by the most popular company 'Canonical'.

Ubuntu is created by open-source developers because they believe that everybody should have access to the best possible technologies.

The global community behind it works together to continually evolve the best systems in the world and then make them available to everybody, absolutely free.

The Founder / Inspirer a.k.a The Driving man in the progress of this amazing OS is Mark Shuttleworth’s. His vision was to create a software platform that competes with the best but also free to use, share and develop. 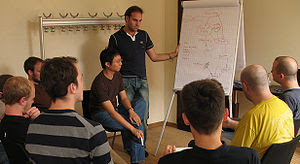 Mark launched the of Ubuntu in the year 2004. Since then the product has been revised, renewed many times, they now renew/upgrade their version in a cycle of 6 months. They have also been launching LTS version which stands for 'Long Term Support' which provides updates/support for 3 years for Desktop and 5 years for Server OS.

The last version they launched was the Ubuntu 13.04 code named Raring Ringtail which will be supported for 9 months and includes cutting-edge new features that make your music, videos, documents and apps much easier to access.

And Ubuntu 12.04.2 LTS is a long-term support release. It has continuous hardware support improvements as well as guaranteed security and support updates until April 2017.

The Next Step - Ubuntu Edge

Canonical recently announced Ubuntu for Android you can read more about it here. The Ubuntu Edge is the next generation of personal computing: smartphone and desktop PC in one state-of-the-art device. It is what i'd like to call all_in_one device.

Have you seen any device which gives you a desktop computing power in a smartphone ? Moreover it also runs Multi-Os/Dual-Boot on phone (android), how cool is that ? Check out the Video below


Ubuntu Edge "the phone of the century"

For us, the people passionate about Ubuntu, a key point of Ubuntu Edge is the usage of Ubuntu, operating system around which we shape our computing lives.

As with a non-Ubuntu background (in the sense of using Android), the energetic reviewer has been heavily impressed by the Edge's hardware specs, acknowledging its perfect construction on all levels: processor, display, build materials, antennas, look, storage, etc, presenting the superphone as the device suitable to satisfy the user's all levels of requirements.

As seen in the below clip, the now-passionate-about-Edge reviewer already purchased an Edge, therefore, pairing the enthusiastic-yet-accurate review with a real desire of using the Edge.

Learn about the features in Ubuntu Edge by Marques Brownlee

What makes this an Amazing Superfone ?

As it's a work in progress, Canonical has yet to finalise specifications, but promises the Edge will have "the latest available multi-core processor", at least 4GB of memory and 128GB of storage. However, it's the 11-pin MHL connection that turns the "superphone" into a desktop computer. The interface acts as both a Mobile High-Definition Link (MHL) interface to send 1,920x1,080 video to a display and a USB On-The-Go host connector to connect a keyboard and mouse. With the supplied cable, you won't need a display with a special MHL-HDMI input and can just connect it to any HDMI port.

Although the proposed 4.5in 1,280x720 display might not set pulses racing, the materials used to build it should. Sapphire crystal, described as "a material so hard only diamond could scratch it", should come as a relief to anyone who's left their keys in the same pocket as their phone. The Edge is also to include support for 4G mobile networks, 802.11n Wi-Fi, Bluetooth 4 and NFC, an 8MP rear camera and 2MP front camera.

The Edge is set to ship as a dual-boot device, with both Ubuntu Mobile and Android (4.3 or better) operating systems. The Android OS will come ready-installed with the Ubuntu for Android app, letting you run an Ubuntu Desktop environment that can be connected to an external display and controlled with a mouse and keyboard from within Android. Canonical plans to release an update to add this capability to Ubuntu Mobile "shortly after launch" as well. Until then, though, the dual-boot Ubuntu Mobile operating system probably won't really come into its own.

Canonical isn't the first company to propose or even release a hybrid mobile/desktop device. In 2011, Motorola released the Atrix, whichcould be connected to a laptop style docking station which allowed it to boot into a Ubuntu-based desktop. Unfortunately, the Lap Dock cost around £300 on top of the cost of phone, which meant that you could get a more powerful nettop PC for less money. There was a much cheaper £75 multimedia dock which let you connect it to an HDMI display, long before the MHL standard became popular, but it wasn't enough to make the Atrix a hit. The innovation awards and critical acclaim it garnered from the industry didn't make an impact on customers.

Funding Collected as of now[/caption]

Canonical has made an unusual choice to finance development of the Ubuntu Edge using crowdfunding website Indiegogo. Victor Palau, VP of mobile delivery at Canonical told us the company believes that "there is a gap in the mobile industry and innovation isn't being pulled through into mass consumer devices. New technologies are available today, but do not have a testing ground to be proven before making it into volume phones. Crowdfunding is a great approach to rally a community of savvy users that are hungry for new technologies and look forward to test-drive them." It's also an effective way to gauge market interest without having to throw money at a project.

Unfortunately, a week in, with a little over 8 million of the required 32 million dollars raised and the rate of pledges slowing, things aren't looking particularly promising for the future of the handset. However, Canonical is making a wise move in leaving the phone's existence down to whether there really is demand for it or not.

Speaking to Reddit users, company founder Mark Shuttleworth confirmed that the campaign would have to raise its full 32 million dollar goal in order for the phone hardware to be produced, describing the sum as "what it costs to bring a device to market". The first 1,250 phones, priced at $725 (£471) were snapped up; hardly surprising given what a bargain they represent if the project does get funded.

What if the Goal is not Met ?

Most of us are little worried now that the campaign has collected only a little over $8 millions in the past 13 days.

If funding isn't met, Canonical will scrap the notion of releasing its own phone hardware and will instead "focus only on commercially available handsets" and continue working with other manufacturers who wish to support development of Ubuntu Mobile. In the interim, if you're curious about Ubuntu mobile OS, you can download it now for your Android smartphone or tablet, but keep in mind this involves flashing your device. Meanwhile, Victor Palau informs us that Canonical is "working with manufacturers to make Ubuntu for Android available later in the year".

As funding currently stands, it looks as through the Ubuntu Edge may end up being the best smartphone that never was. We'd love to get our hands on one, though, and there's still time to pledge money to the project at Indiegogo.

If you are interested in the so called "Phone of the Century" make sure you contribute here http://igg.me/at/ubuntuedge


Why i Recommend Ubuntu? : Analysis

Ubuntu for Android demo, how well does it collaborate with smartphones ?